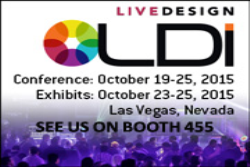 We look forward to welcoming you to Booth 455 at LDI.

We are pleased to be unveiling two new special effects technologies this year.

Le Maitre’s G300-SMART is a professional smoke machine, designed with the future in mind. This innovative new machine features IoT capability via Wi-Fi, wireless set up and diagnostics, and an easy to read backlit LCD display.

Building on the solid foundation of Le Maitre’s flagship smoke machine, the G300, the G300-SMART retains all the features that have made the G300 the industry-leading unit it is. It is rugged, versatile and durable, with an extremely high output of dense white smoke. In addition, the G300-SMART has a user-friendly LCD display, DMX in and out, 0-10V control, as well as fluid out and fluid low reporting.

Having Wi-Fi on board gives the user a whole new level of flexibility, being able to set and change the configuration of the unit via their mobile device, such as a phone or tablet. The user is able to set the interval, duration, flow level, pre-delay times, as well as turn the unit on or off. The user can also diagnose and debug any errors with the device wirelessly.

Once connected via Wi-Fi, the G300-SMART can be monitored and controlled over the Internet through Le Maitre’s evolving Machine Interface Portal.

The X2 WAVE FLAMER is a fluid based flame machine unlike anything seen before.

Combining a single movable head with a pressurized fuel source, the X2 is capable of producing a wide range of unique flame effects. The  swiveling head allows the X2 WAVE FLAMER to produce very fast and accurate flame surges from 3m to 10m in height within a radius of 210°.

Controlled by DMX or a wireless option, the resulting motion opens up completely new possibilities in the design of indoor or outdoor shows.

Other Le Maitre products we’ll be showing at LDI this year include:

The compact four-canister flame unit offers a great level of versatility. It can be operated with each canister being fired independently, with the option of multiple colours being loaded to provide a truly stunning visual display from a single machine. Firing the canisters sequentially can also be used to increase the duration of the effect, with up to 120 hits in total and with each flame reaching around 12 foot in height.

Alternatively, all four canisters can be fired at the same time to produce a much bigger single flame reaching up to a spectacular 25 foot. This makes it an ideal choice for stadiums and larger venues.

The powerful and versatile MVS Hazer has two variable-speed high power fans which can be used to control the force and direction of the haze stream, as well as a unique oscillating mode for automated back and forth sweeping of the haze stream.

As well as our pioneering G300-SMART, we will be showing the flagship G300, the GForce 1, GForce 2 and GForce 3, the Freezefog Pro, which produces atmospheric low fog, and the portable Mini Mist.

We will also be showing the RESCUE 300, Le Maitre’s new high powered smoke generator. With simplified operational controls and increased reliability, this machine is targeted specifically for the Emergency Services.

From the TBF-Pyrotec flame range, which is exclusively distributed in North America by Le Maitre USA, we will be showing the Single Shot and the Inverted 5-Master.

To complete the range there will be our newly launched ScentFX. Used with fans, blowers, fog or haze machines, this range of unique scenting products can add aromas such as roses, vanilla or chocolate, to name but a few, to all sorts of occasions and events.

We will also be showing the Electric Air Cannon which fires streamers, glitter or confetti up to 15 metres, at any angle and with minimum noise, and Le Maitre’s Arctic Snow Machine with its realistic white, fluffy and light snow fluid.

We look forward to welcoming you to Booth 455 where we would love to give you a tour and tell you more.