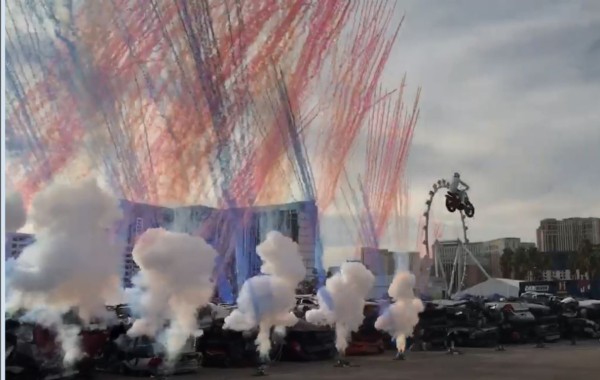 On July 8, Stage & Effects Engineering were at the Evel Live Show in Las Vegas with our Smoke Mines.

During the event, action sports icon Travis Pastrana paid tribute to the legacy of Evel Knievel by recreating three of his biggest stunts in one evening.

In the first two motorcycle stunts, Pastrana jumped over 52 crushed cars. He then jumped 16 Greyhound buses. The finale was his jump over Caesars Palace Fountain, recreating the jump that Knievel attempted, and failed, in 1967.

As Pastrana flew through the air, Le Maitre Smoke Mines burst into action, helping to thrill the audience of approximately 25,000 in Las Vegas as well as those watching the 3-hour televised special on the History Channel.