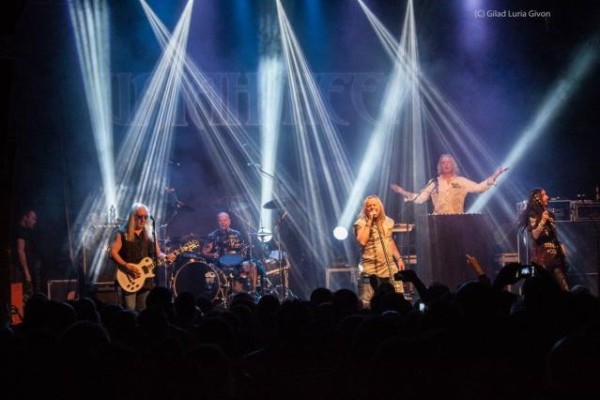 Le Maitre’s MVS Hazer is the only haze machine that rock legends Uriah Heep will use on stage.

With 20 plus appearances at summer festivals across Europe over the coming weeks, Ian (Scampi) Bintliff, Uriah Heep’s tour manager and lighting director, comments: “The MVS system is probably the best hazer I have ever used. The haze coverage is excellent and hangs beautifully in the air. I have even used the MVS on an open air stage where large hazers have struggled and I got the best results of the day! The MVS is also the most remarkably economic hazer I have ever witnessed. One small bottle is good for up to fifty 90-minute shows, which makes tour accountants (in this case me!) very happy!”

The MVS hazer is powerful and versatile. With two variable speed, high power fans, it can be used to control the force and direction of the haze stream. There is even an oscillating mode for automated back and forth sweeping of the stream. Variable haze density, onboard DMX and the ability to position the unit at any angle makes this the band’s unit of choice.

Combined with Le Maitre’s PureHaze fluid, it produces a very dry, low residue output with a long hang time. With 90% active ingredient, PureHaze fluid is sugar and water-based and therefore completely safe to use on stage. As lead singer Bernie Shaw said: “With 5 singers in the band, we need a product that does not dry your throat, is tasteless, odourless but efficient and reliable enough to make the light show look good, but not hinder our performance. A very tall order that Le Maitre hazers handle with ease.”

Bintliff agrees. “As tour manager and LD for Uriah Heep, I have been using the MVS for over four years and have never had a problem. I simply plug it in, switch it on, set the required volume and leave it to do its thing. I was so impressed that I insisted on MVS for the recent Thunder UK arena tour where two units were ample, even for Wembley Arena! One more thing, it doesn’t affect singers’ voices! Uriah Heep are famed for their five-part vocal harmonies, which before MVS caused me no end of problem – one or another of the band always had a throat problem and asked for the “smoke” to be turned off. Since using the MVS, I haven’t had one complaint!”

Find out more about the MVS Hazer.